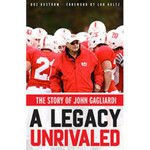 A Legacy Unrivaled: The Story of John Gagliardi

Find this book in the library

John Gagliardi, who served as the head football coach at Saint John’s University from 1953 to 2012, won more football games than any coach at any level of collegiate ball. His innovative and unconventional approach to coaching— including not allowing tackling during practices— not only helped the team win nearly five hundred games and four national championships, but placed Gagliardi as an inspiring leader, mentor, and father figure to hundreds of student- athletes over his sixty years as a head coach. Gagliardi continues this role as teacher and mentor through his “Theory of Coaching Football” course at Saint John’s, which is one of the most popular classes on campus every year.

A Legacy Unrivaled explores the man, his football philosophy, his life lessons, his sense of humor, and his connections to others through a very personal journey by author and former player Boz Bostrom. Including recollections from former Johnnies, the book offers a firsthand look at how Gagliardi’s high expectations for his students and his focus on making the person rather than the player made him so successful on the gridiron.